We would love to hear from you! Here are some places you can find us.

Our mailing list is metallb-users@googlegroups.com. It’s for discussions around MetalLB usage, community support, and developer discussion (although for the latter we mostly use Github directly).

For a more interactive experience, we have the #metallb slack channel on k8s.slack.com. If you’re not already logged into the Kubernetes slack organization, you’ll need to request an invite before you can join.

If you prefer a more classic chat experience, we’re also on #metallb on the Freenode IRC network. You can use Freenode’s web client if you don’t already have an IRC client.

Use the GitHub issue tracker to file bugs and features request. If you need support, please send your questions to the metallb-users mailing list rather than filing a GitHub issue.

We welcome contributions to MetalLB! Here’s some information to get you started.

This project is released with a Contributor Code of Conduct. By participating in this project you agree to abide by its terms.

Contributions to this project must be accompanied by a Contributor License Agreement. You (or your employer) retain the copyright to your contribution, this simply gives us permission to use and redistribute your contributions as part of the project. Head over to https://cla.developers.google.com/ to see your current agreements on file or to sign a new one.

You generally only need to submit a CLA once, so if you’ve already submitted one (even if it was for a different project), you probably don’t need to do it again. When you submit pull requests, a helpful Google CLA bot will tell you if you need to sign the CLA.

Before you make significant code changes, please open an issue to discuss your plans. This will minimize the amount of review required for pull requests.

All submissions require review. We use GitHub pull requests for this purpose. Consult GitHub Help for more information on using pull requests.

In addition to code, there’s deployment configuration and documentation:

To develop MetalLB, you’ll need a couple of pieces of software:

Optionally, if you want to update the vendored dependency, you’ll need glide, the Go dependency manager

Start by fetching the MetalLB repository, with go get go.universe.tf/metallb.

From there, you can use normal Go commands to build binaries and run unit tests, e.g. go install go.universe.tf/metallb/bgp-speaker, go test ./internal/allocator.

For development, fork the github repository, and add your fork as a remote in $GOPATH/src/go.universe.tf/metallb, with git remote add fork git@github.com:<your-github-user>/metallb.git.

To really test MetalLB fully, you need to run it in a Kubernetes cluster, to verify that all the pieces are working together. The repository has a set of Fabric commands that makes this easy, by setting up a Minikube sandbox and deploying a production MetalLB setup, but running your locally built binaries.

Start by running make start-minikube. This will:

At this point, your sandbox is running the precompiled version of MetalLB, pulled from Docker Hub.

You can inspect the state of the test-bgp-router by running minikube service test-bgp-router-ui, which will open a browser tab that shows you the current BGP connections and routing state, as seen by the test routers.

When you’re ready to test a local change you’ve made to MetalLB, you can build and deploy MetalLB containers to your sandbox. First, if you’re using minikube, leave make proxy-to-registry running in a second terminal. This will make the cluster’s internal registry available on localhost, so that we can push to it.

To deploy your changes, run make push. This will:

Once the push is done, MetalLB will still be running in your Minikube sandbox, but using binaries built from your local source code instead of the public images.

Note for MacOS users: Since Docker is run inside a virtual machine in MacOS the local registry won’t work out of the box. To make it work you have to add docker.for.mac.localhost:5000 under Insecure registries in your Docker daemon preferences. Once you’ve done that, make push should work. 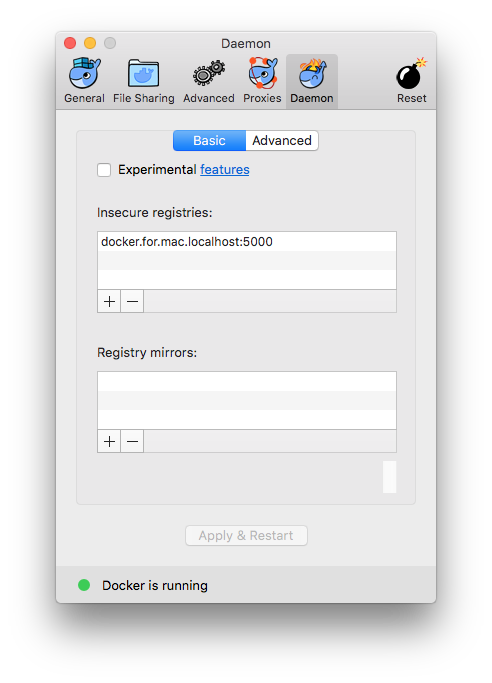 If you need to get back to a working configuration, make push-manifests will revert MetalLB to running from the public Docker Hub images and the config from the repository.

When you’re done with minikube, run minikube delete to destroy the sandbox.

If you’re already using minikube, be warned: make start-minikube will touch the default minikube sandbox, and so may interfere with other experiments you have going on.

Testing outside of Minikube

You can also use make push on clusters other than minikube. make push will deploy to whichever cluster your kubectl is currently pointing to.

If your cluster has a local registry, usage instructions are exactly the same as with minikube: leave make proxy-to-registry running in a secondary terminal, and then make push each time you want to test your changes.

If you want to use an external registry, you can specify it with the REGISTRY make variable. For example, make push REGISTRY=danderson will push the docker images to danderson’s account on docker hub, and make the cluster pull from there as well.

Released versions of MetalLB (0.3.0 and later) use multi-architecture images, and so should work on all platforms supported by kubernetes. However, the dev builds made by make push only build for one architecture, to save time.

By default, make push builds binaries for amd64 (aka x86_64). If you want to test on a different architecture (for example a raspberry pi cluster), you can select the architecture of the dev builds by setting the ARCH make variable to your desired architecture, one of amd64, arm, arm64, ppc64le, s390x. For example, make push ARCH=arm will build and deploy containers that work on ARM machines.

You can write custom make configuration options to Makefile.defaults, and they will be included as defaults for all builds. For example, if you normally build with go1.10beta1 and push arm64 binaries to a custom registry, you can use the following Makefile.defaults:

To see a list of customizable options and what they do, look at the top of Makefile.

While testing, it might be useful to peer with “real” routers outside of the cluster, rather than always use the in-cluster test-bgp-router. If you do so, you need to reconfigure the address pool from the default config! The default configuration uses the TEST-NET-2 IP range from RFC5735, which is reserved for use in documentation and example code. It’s fine to use it with our test-bgp-router, since they doesn’t propagate the addresses beyond themselves, but if you try injecting those addresses into a real network, you may run into trouble.

The website at https://metallb.universe.tf is pinned to the latest released version, so that users who don’t care about ongoing development see documentation that is consistent with the released code.

When editing the website, you can preview your changes locally by installing Hugo and running hugo server from the website directory.